I recently (2012) stepped across this submission again, and was surprised and also feeling a bit depressed that we never fully realised this piece at that time – this was before facebook & co took off, see “the next hype” box in the picture below. Anyway, the concept is still here, and I believe the assertion is still valid. 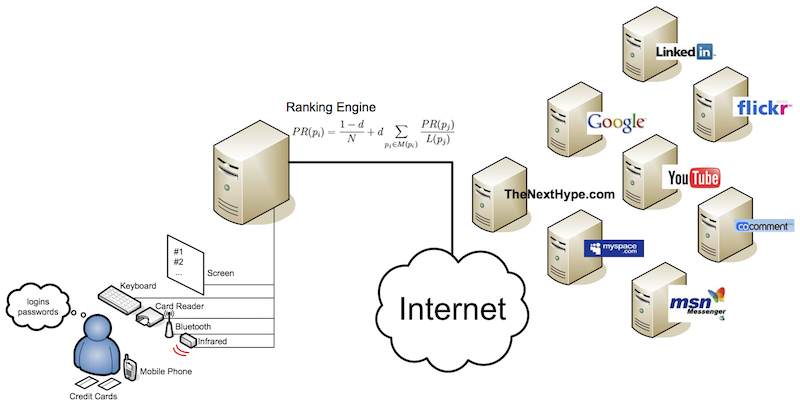 We all pursue a multitude of lives in the electronic realm. A schizophrenia, that splinters out identity across communities, blogs, and portals. In every on-line community we cultivate our alter ego with a biography, network, reputation and fame. The writer Joseph Campbell once said we were all potential heroes. Now, with the help of a webcam or blog, we are all potential celebrities. When he got tired of his original quote, Andy Warhol gave with his adapted variant of the “15 minutes of fame” hope to the insignificant, but was at the same time laughing at the famous. But how does this relate to the on-line world? How do we compare to other on-liners? Is there a reward for all the time and enthusiasm we sacrifice to screen and keyboard? Is our on-line existence sufficiently important to be a celebrity? Will we be famous to only fifteen people, as Warhol’s original quote has been adapted once more in the context of emerging on-line phenomena?

Find it out with “In 15 minutes everybody will be famous.” Attracted by curiosity and self(over)estimation on-liners are drawn to our system. They are asked to present as many artefacts (mobile phone, credit cards, usernames, passwords, etc.) as possible to the system. The system will automatically discover their online trails with the information drawn from the artefacts. A variant of Google’s page rank algorithm (our people rank algorithm) calculates individual on-line celebrity values based on social networks and on-line behaviour. The result is a single value that sums up ones entire on-line existence. There are obvious ways to improve an on-line existence. Come back – with the right network everybody can be famous in 15 minutes.

Project Details (Excerpt from the Submission)

The forefront goal of this project is to sum up your online existence in one single numeric value and thus render your existence comparable to others. But how much information are you willing to hand out for this single number? Loosing privacy for fame is a creeping process in real life – here it is rendered explicit. What are you ready to reveal? Your e-mail address? Your MySpace credentials? Your contacts on your mobile phone? Your credit card? The more you offer the more likely the system gets the big picture across communities and metaverses. And what about elevating your celebrity value by faking an online presence? What about stealing credentials? Without being asked directly, the user is forced to think about these questions on his way to fame and reflect on his motivations. In the process one will not only learn how much or little one matters in the electronic universe but also possibly rediscover long forgotten traces left throughout electronic systems.

The interaction is realized with simple, universally understood iconic dialogs and thus language independent. There are no inherent geographical or cultural restrictions whatsoever. However, due to the selection of supported online communities the implementation is currently biased towards the western hemisphere.

The driving people behind this project are the founding members of Corebounce Association, which were also deeply involved in the forerunners: Pascal Müller, Stefan Müller Arisona, Simon Schubiger-Banz, and Matthias Specht. The original concept, as well as the software development was carried out by them. The project is intended to be instantiated either as an installation or as an online platform. The forerunner RipMyDisk was open to the public during Interactive Futures 2006 (http://interactivefutures.ca/if-legacy-mandate/if-legacy/). The software is entirely based on Soundium / Decklight which is partially open source.

From a technical perspective, RipMyDisk demonstrated the feasibility but also the limits of access to physical artefacts linked to the online world. While we continuously improve on artefact support, we also integrated additional input devices such as card readers and a keyboard. Whereas RipMyDisk was a specialized system tailored for a specific event, the new system is greatly modular to accommodate a wide range of community software and web interfaces to have a maximum reach into the online world. From a social viewpoint two remarkable observations were made: First, technical limitations were circumvented by ad-hoc social networks that emerged around “gateway” artefacts. We call a “gateway artefact” a device that can be used to feed information into the system without being itself a representation of real life identity. Second, privacy is at least in an installation setting of little or no concern. The urge to participate, here enforced by the urge to become famous temporally blinds the user in respect to privacy and security.

The Soundium research platform served as the technological basis for the realization of the project. As indicated earlier Soundium has roots in various computer science research domains ranging from software engineering, human-computer interaction techniques to real-time multimedia processing and computer graphics. The development of platform was initiated by Corebounce in 1999 and has since then been supported by various Swiss universities and companies. One of the principal design goals of Soundium was to provide a highly modular software architecture for the rapid realisation of scientific experiments as well as artistic ideas. Besides of this project and its basis, RipMyDisk, Soundium has been intensely been applied for live visuals and VJ performances, as well as interactive media art installations (for example the Digital Marionette, currently exhibited at the Ars Electronica Center). Soundium runs on Linux and is freely available.

The system draws it vigour from three key elements:

The research instance of the project is currently running at ETH Zurich’s Computer Systems Institute. This is where the software further evolves. Several partners are using parts of the code for rapid-prototyping of their own research projects. Corebounce will be showing artistic applications of the software at this year’s TweakFest (Zurich, http://www.tweakfest.ch) and Digital Art Weeks (Zurich, http://www.digitalartweeks.ethz.ch).

The project addresses everyone with an Internet identity, and/or those that are actively involved in social or technological aspects of digital communities.

Some parts of the software are already open-source, or will be released as open-source within a short timeframe. Some parts are currently closed-source, but available for free. Current licensees are mainly research institutions involved in computer systems, network technology, as well as multimedia and digital art.

The main contribution of our project is the novel way to look at communities and to explore the interconnections between our physical identity and our various net identities. The project reveals many important social and technical issues. In particular, it highlights the widening gap between the need for privacy versus the desire for publicity. With its scientific orientation, it serves as a solid foundation for future projects in the domain. It is our goal to contribute to social, sociological, and technical research related to digital communities, as well as to artistically oriented projects.