Virtual VJ takes the concept of Virtual DJ one step further and unites the role of the DJ and VJ into one interface: 3D space. The concept of Virtual VJ is to allow two or more users to control different aspects of the sound and video environment with their movements. One tracker is set to trigger sound and video and the other is set to manipulate the sound and video initiated by the first tracker. The focus of the media integration is on the development of observable connections between the audio and video mediums in order to assist the users with ease of interaction.

The key conceptual idea that is explored in Virtual VJ is the idea of cooperation and the sense of personal space in ephemeral, virtual systems. This is achieved by programming the trackers so that dramatic events happen when the two trackers are close together or far apart. For example the environment has been programmed so that the trackers apply distortion to the audio when they are proximate to each other. At the same time video effects are added when the same proximity of the two trackers is observed.

This can result in a game of cat and mouse where the users determine whether they will chose to closely follow the movements of the other participant or decide whether they wish to pursue a more individual experience. Audience members are allowed to interact in whatever manner they chose, but at the same time noticeable results will be produced as they inhabit similar spaces, encouraging them to cooperate with each in order to produce dramatic audio-visual results. 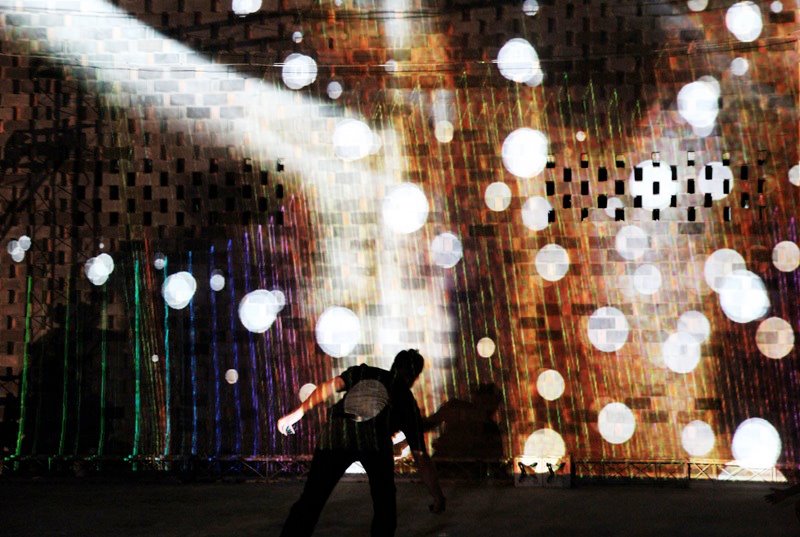